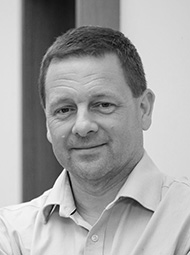 Professor Andrew Butterfield is based in the School of Computer Science and Statistics in Trinity College, the University of Dublin.

His research interests include the Formal Semantics of Programming languages and Formal Verification Techniques, with a focus on the Unifying Theories of Programming (UTP) framework. Andrew has a strong interest in applying such theory in industry, as exemplified by his current work for the European Space Agency, and his ongoing active involvement with Formal Methods Europe.

Current work is also exploring suitable tool support for UTP ranging from calculator-like tools for rapid theory prototyping through the use of industrial strength model checkers like FDR and theorem-provers such as Isabelle/HOL.